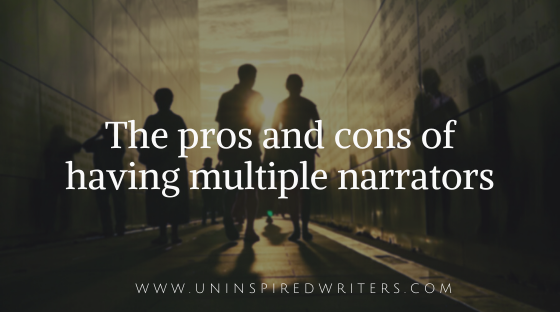 I’m yet to write a novel that features only one POV narrator. I’ve written short stories with only one consistent POV character, but when it comes to writing longer stories, I always end up with at least two. I’ve been thinking a lot recently about the pros and cons of books with multiple narrators, so I thought I’d share some of the pros and cons for any writers who are trying to work out their own narration choice for a project.

Pros of having multiple narrators

You can unveil more of the story
If you only write from one character’s perspective you are limited to only seeing what they see. By introducing the point of view of other characters, you are able to explore aspects of the story more thoroughly. You can reveal secrets that other character’s are oblivious too, and create further layers to the story by unveiling how different characters think and act.

It allows readers to see characters through the eyes of other characters
It’s always exciting when a character considers themselves to be a certain way, only for another character to see them in a different light from the outside. Rather than the bias opinion of a single narrator, the reader is able to consider that things may not be as they seem. It’s also a really fun way to describe a character without them having to describe themselves in their own scenes.

It can add mystery and intrigue
A lot of thriller and mystery books have multiple narrators for this exact reason. Mystery and intrigue can be built up as different aspects are revealed, and certain characters exempt from the revelation. It’s a great way to build tension, especially if the reader knows what’s coming and a one of the characters doesn’t.

Cons of having multiple narrators

It can get confusing
Using too many POVs can be confusing for the reader. It’s so important that each POV character has their own distinct voice. I’ve read books in the past where I’ve had to flick back to check with character’s chapter it was, as their voices were the same. But of course, there are some great books out there that use a lot of different perspectives. Nine Perfect Strangers by Liane Moriarty is one, and of course The Song of Ice and Fire series by George R.R. Martin. If you don’t was confused readers you need to do what these writers have done, and make sure voice is distinct and interesting enough to stand apart.

You run the risk of telling the same scene twice
Another book I read once was split in two parts, which each half being told by the two main characters. But it was essentially the exact same scenes told by somebody else. And it was just really dull. If you’re using more than one character, try to keep the story moving by going from scene to scene, without reliving the same chapter again through different eyes.

It can ruin the pace of the story
This follows on from the point above, really. If you chop and change between characters it can slow the pace of your book. Readers who are intrigued by one character’s narration may be annoyed to have to wait a whole chapter before getting back to their particular story. This why the scenes need to be interwoven, so the pacing is still there to keep the book exciting throughout.

26 thoughts on “The pros and cons of having multiple narrators”