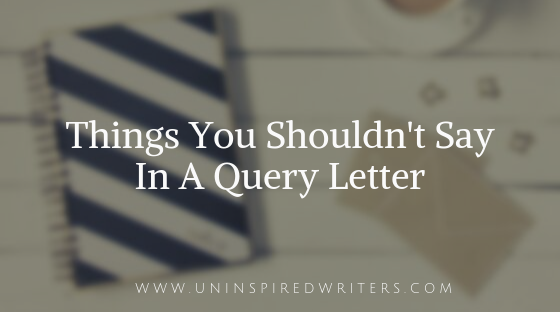 Remember, the letter should be a product of your own, and different things will suit different writers and different agents and different stories. But this is some general advice I’ve learned at writing events and through agent interviews and articles.

Dear Sir/Madam…
Really? This will be the biggest query letter mistake you ever make. Sending out several queries at one time? That’s okay. Sending out the exact same query to a number of agencies/publishers? Not okay. You need to know who you’re writing to, and if your query is not addressed personally, by name, to that person, you will put them off at once. No-one wants to read a generic email. You need to explain why them, you need to know what they’re looking for, and why your book is a match. Lack of personalisation could see your query deleted without even being read.

This book is the next…
Big bold statements may not work in your favour. Yes, tell them where your novel would fit in the market. Yes, tell them who your writer inspirations are. But don’t tell them you’ve written the next Harry Potter, or the next Gone Girl, or the next Game of Thrones. You don’t want to be the next of something that’s already been written. Instead, you could mention that fans of Harry Potter would love this story. Or this book would be enjoyed by fans of Gone Girl. See how it’s a more humble comparison?

It’ll be a mistake to say no…
I learned at a writing event, that people actually say this! “It’ll be a mistake to say no, because this book is easily going to be a best seller.” Um….conceited much? Not to mention the fact that it sounds a little aggressive. You don’t need to tell the agent how to do their job. They’re experts. They know what they like and what they don’t. And if you come across arrogant, they may not consider working with you, no matter how good your story.

I’m sorry if it’s not any good…
Likewise, I found out that people say this. “I’m sorry if it’s not any good, I don’t want to waste your time.” Okay, we’ve said no to arrogance, but it’s also a big no to put yourself/your story down. Your query letter is essentially your CV. Don’t tell the agent it’s no good! Because if you don’t believe in your story, how can you expect anyone else to? Be confident, but humble at the same time. Sell your story, and be positive about it.

It’s not finished yet…
Most agents/publishers are looking for finished works. That’s not to say there aren’t exceptions, but generally this is what you should expect. If your story is not finished or not edited, don’t send it.

Lies
By writing to an agent/publisher, you’re essentially applying for a job. Don’t start of on a negative. They need to trust you, and you them. They need to be honest with you, and you them. So don’t say you’ve won competitions if you haven’t, don’t say you’ve had an offer of representation if you haven’t. The truth always comes out eventually, and you could ruin your working relationship before it’s even begun.

TMI
Yep. TMI. Too Much Info. Your letter should be thoughtful and concise. Not too long, not too short. Don’t ramble on. Don’t include too much information about who you are as a person, especially if you’re including facts that don’t relate in any way to your writing. This is a sales pitch, not the story of your life.

Does anyone else have any advice on things to leave out of a query? I’d love to know, so pop your comments below.