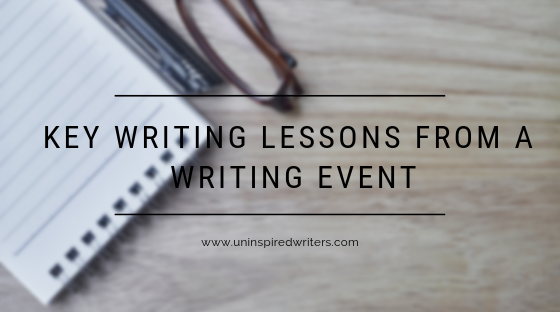 Yesterday, I attended an incredible writing event hosted by Jericho Writers. It was a fantastic day, with talks from amazing writers, authors and agents. I just need to state that I would 100% attend one of their events again, and recommend them to other writers hoping to gain huge insight into writing, getting an agent and publishing.

So, I thought I’d share with you all some of the writing lessons I took away from the day. Next week I’ll share some of the publishing lessons too, but I think it’ll be too much if I try and fit everything into one blog post, so here we go!

1. Speech is one of the most powerful character traits
The first talk of the day was about ‘advanced characterisation’ and spoke about the various ways we can portray our characters to ensure they have depth. ‘Speech’ was discussed for a while as a powerful tool to really show who a character is, rather than simply tell. You can tell a lot about a character by the way they interact with people, their word choices, the things they choose to say out loud and the things they keep inside. It can help show you what their relationship with a person is like, whether it’s tense or relaxed for example. This talk was given by writer J.S. Law, and he actually said he does whole drafts based on individual characters’ dialogue. This way he can assure their voice is consistent and in line with who they are and how they would talk. This is a tip I’m going to take up myself.

2. There are no rules
It’s spoken about a lot in writing, the rules we follow to try and make sure we fit in, or are doing things properly. The rules we break because we don’t want to follow the crowd. But the truth is, there are no rules. If you want to write in first person present tense do it. If you want to switch tense with each POV chapter do it. Essentially, if you have a reason to do it the way you’re doing it, then don’t worry about what people say is right or wrong. It is creative writing, and if you bend to meet certain rules you lose your freedom to be creative and do something different.

3. Sometimes it’s okay to tell, instead of show
I say this one, because show don’t tell is spoken about a lot, and haven’t we just said there are no rules? But Debi Alper gave a great example during her talk about why it’s sometimes okay to tell instead of show. Her example was this:
If you’re writing a romance novel and the love interest has come around for coffee, you can show the character’s nervousness through how she makes the coffee. Show her trembling hands, her urgency to wipe away spillage so her crush doesn’t think she’s clumsy or messy. However, if you’re writing crime and somebody has come over for coffee because they’ve big news/found a clue, then the making of the coffee isn’t important and can be told instead. In this example, nobody wants to see the process of making the coffee, they just want to get to the big reveal! In essence, writing is all about finding the balance.

4. Post-its can be used for everything
In a brilliant, and very funny, talk by author Julie Cohen, she explained how Post-Its are a writers best friend. She gave six examples of how Post-Its can be used in writing. They can be used to brainstorm ideas, plan your story, see the stories shape, add sub-plot, see your story’s bones/outline, and revise your story. She chose post-its because they’re easy to move around, they’re disposable and they give you freedom to play around with all aspects of your novel writing journey. I won’t go into this in as much depth, as this is a talk she does at many events, and there is too much to get into one blog post point. But what I will say is this: get some post-its (or index/flash/revision cards) and see how they can help you arrange your plotting and planning.

5. Every scene should move the story forward
In writing, there’s no use in a scene that doesn’t move the story and the plot forward. One way to test this is to use a ‘Narrative Triangle’. Ask yourself three questions for each scene: 1. Where do you start? 2. What happens? 3. Where do you end up?
If  you end up in the same place as you started then the scene doesn’t move the story forward, and should be revised to change this, or removed completely. Readers don’t have the patience to wait for things to slowly unfold, they want to be constantly swept along with the story.

I feel like these five points don’t really give the day justice, but I hope some of them are helpful. Next week I will post key learning points about getting agents/publishing and I hope that’ll offer you a lot too.

Have you ever been to a writing event? What did you learn? Share in the comments.

32 thoughts on “Key Writing Lessons from a Writing Event”